The world remains full of opportunities and challenges.

Although we’ve seen global markets moving in tandem in recent years, Sara Potter of FactSet pointed out, “…we’re starting to see the end of the synchronized global growth that has prevailed over the last two years. While the U.S. economy remains strong, growth in Europe and Japan is moderating, and emerging markets are under increasing economic and financial market pressure.”

Strong economic growth and robust earnings helped U.S. stocks significantly outperform other regions of the world during the third quarter of 2018. In addition, the resolution of some trade tensions, namely the signing of a United States-Korea trade deal and the renegotiation of NAFTA (North American Free Trade Agreement), helped soothe investor concerns, reported Jeffrey Kleintop of Schwab.

The trade relationship between the United States and China, however, remains an itchy rash marring the outlook for economic growth in both countries. The Economist Intelligence Unit reported:

“Since the start of 2018 trade policy has become the biggest risk to The Economist Intelligence Unit's central forecast for global economic growth. We now expect this risk to materialize in the form of a bilateral trade war between the United States and China, with negative consequences for global growth…The trade war comes at a challenging time for the Chinese economy…The trade war will also affect the U.S. economy…the escalating trade dispute with China will start to weigh on growth later in 2018 and into 2019 – we now expect growth to slow in 2019 to 2.2 percent (2.5 percent previously). The U.S. manufacturing and agricultural sectors, in particular, will be hit by the trade dispute, and rising interest rates will cause private consumption to slow.”

Chinese stock markets generally lost value. However, some Chinese indices performed better than others, depending on the type of stocks included in the index. For example, the MSCI China Index, which measures large- and mid-cap stocks of various share types that trade on the mainland and in Hong Kong, was down 8.45 percent during the quarter.

In contrast, the MSCI Red Chip Index, which is comprised of stocks that are incorporated outside of China, trade on the Hong Kong exchange, and are usually controlled by the state or a province or municipality, was up 3.25 percent for the quarter and flat year-to-date.

Emerging markets were weak performers overall during the third quarter, but there were bright spots. Schroders explained, “Turkey was the weakest index market amid a sharp sell-off in the lira…By contrast, Thailand recorded a strong gain and was the best performing index, with energy stocks among the strongest names. Mexico outperformed as the market rallied following general elections and an agreement with the United States on NAFTA renegotiation. Taiwan, where semiconductor stocks supported performance, also outperformed. Despite ongoing risk of new U.S. sanctions, Russian equities also finished ahead of the benchmark, benefiting from crude oil price strength.”

Political strife continued to hamper the European Union and the United Kingdom during the third quarter. Overall company profits weren’t particularly impressive in the region and neither was economic growth, reported BlackRock.

As the third quarter came to a close, Barron’s conducted its Fall Big Money Poll. Vito Racanelli reported almost two-thirds of professional money managers from across the country said the U.S. stock market was fairly valued – and that was before the market slid lower early in the fourth quarter. While the money managers’ assessment doesn’t mean all U.S. stocks are fairly valued, there may be opportunities to invest in sound companies at attractive prices.

Trade tensions, inflation trends, and central bank monetary policy are likely to affect the performance of markets during the remainder of 2018 and into next year. 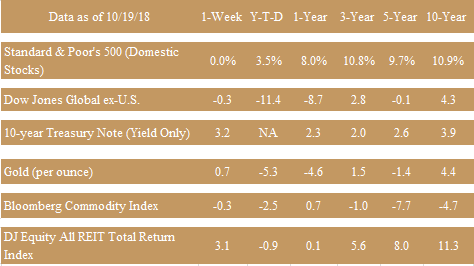 Today, emotional-support and service animals may be found in workplaces, beauty salons, cafes, theatres, airplanes, and many other places where our parents or grandparents would have been surprised to find them. Landlords charge pet rent, and some service animals qualify as a medical expense under Internal Revenue Service rules.

It is also becoming more and more common for pet owners to include pets in their financial planning goals. While you cannot leave your pet property, you can make arrangements to have your pet cared for after you are gone.

Last week, The Economist reported, “Two-thirds of all horse owners in America have made some provision in their wills for their pets, according to a survey by the American Pet Products Association. Over a third of American pet owners say they would pay for animal-related expenses by putting less into their retirement accounts. And, three-quarters of those buying a home said they would turn down an otherwise ideal property if it did not meet their animal’s needs.” In addition, pets can become beneficiaries of trusts.

Whether you think the idea of providing financial support for pets is silly or you wholeheartedly embrace it, the role of animals in the lives of many Americans is changing.

“Animals are such agreeable friends - they ask no questions; they pass no criticisms.”
--George Eliot (a.k.a. Mary Anne Evans), English Novelist

* These views are those of Carson Group Coaching, and not the presenting Representative or the Representative’s Broker/Dealer, and should not be construed as investment advice.
* This newsletter was prepared by Carson Group Coaching. Carson Group Coaching is not affiliated with the named broker/dealer.
* Government bonds and Treasury Bills are guaranteed by the U.S. government as to the timely payment of principal and interest and, if held to maturity, offer a fixed rate of return and fixed principal value. However, the value of fund shares is not guaranteed and will fluctuate.
* Corporate bonds are considered higher risk than government bonds but normally offer a higher yield and are subject to market, interest rate and credit risk as well as additional risks based on the quality of issuer coupon rate, price, yield, maturity, and redemption features.
* The Standard & Poor's 500 (S&P 500) is an unmanaged group of securities considered to be representative of the stock market in general. You cannot invest directly in this index.
* All indexes referenced are unmanaged. Unmanaged index returns do not reflect fees, expenses, or sales charges. Index performance is not indicative of the performance of any investment.
* The Dow Jones Global ex-U.S. Index covers approximately 95% of the market capitalization of the 45 developed and emerging countries included in the Index.
* The 10-year Treasury Note represents debt owed by the United States Treasury to the public. Since the U.S. Government is seen as a risk-free borrower, investors use the 10-year Treasury Note as a benchmark for the long-term bond market.
* Gold represents the afternoon gold price as reported by the London Bullion Market Association. The gold price is set twice daily by the London Gold Fixing Company at 10:30 and 15:00 and is expressed in U.S. dollars per fine troy ounce.
* The Bloomberg Commodity Index is designed to be a highly liquid and diversified benchmark for the commodity futures market. The Index is composed of futures contracts on 19 physical commodities and was launched on July 14, 1998.
* The DJ Equity All REIT Total Return Index measures the total return performance of the equity subcategory of the Real Estate Investment Trust (REIT) industry as calculated by Dow Jones.
* International investing involves special risks such as currency fluctuation and political instability and may not be suitable for all investors.
* Yahoo! Finance is the source for any reference to the performance of an index between two specific periods.
* Opinions expressed are subject to change without notice and are not intended as investment advice or to predict future performance.
* Economic forecasts set forth may not develop as predicted and there can be no guarantee that strategies promoted will be successful.
* Past performance does not guarantee future results. Investing involves risk, including loss of principal.
* You cannot invest directly in an index.
* Stock investing involves risk including loss of principal.
* Consult your financial professional before making any investment decision.